A school bell brought us all smartly to attention as Steve Parker pointed out that the majority of the audience had obviously grown up in an era which instilled respect for the school bell, So started a great evening of entertainment, humour and new experiences. Steve’s encyclopaedic knowledge encompasses from the fascinating to the bizarre and hilarious.

Back in the 70’s when I was at Catering College; English wines didn’t exist so producing the range of excellent wines we tasted is quite an achievement in 45 or 50 years. I recall in the early 1990’s John Richards (known as JR in the Dallas era), general Manager of The Old Ship Hotel, Brighton, introduced me to two of the early successful English wines from Brecky Bottom Vineyard in the Sussex Downs. The wines were based on two grape varieties which could survive the English climate, Seyval Balnc and Muller-Thurgau, producing Alsace type wines.
At our tasting in 2019, we tasted wines from 14 grape varieties and blends; all but one were very impressive. The looser was Denbies Zig Zag Red, named after the iconic Zig Zag Road on nearby Box Hill which featured in the 2012 Olympic cycling; not a wine I’d choose again! Each wine was matched with impressive English cheeses and interesting meats.

Notables from the tasting (or this article would go on weeks!):
See chart below. 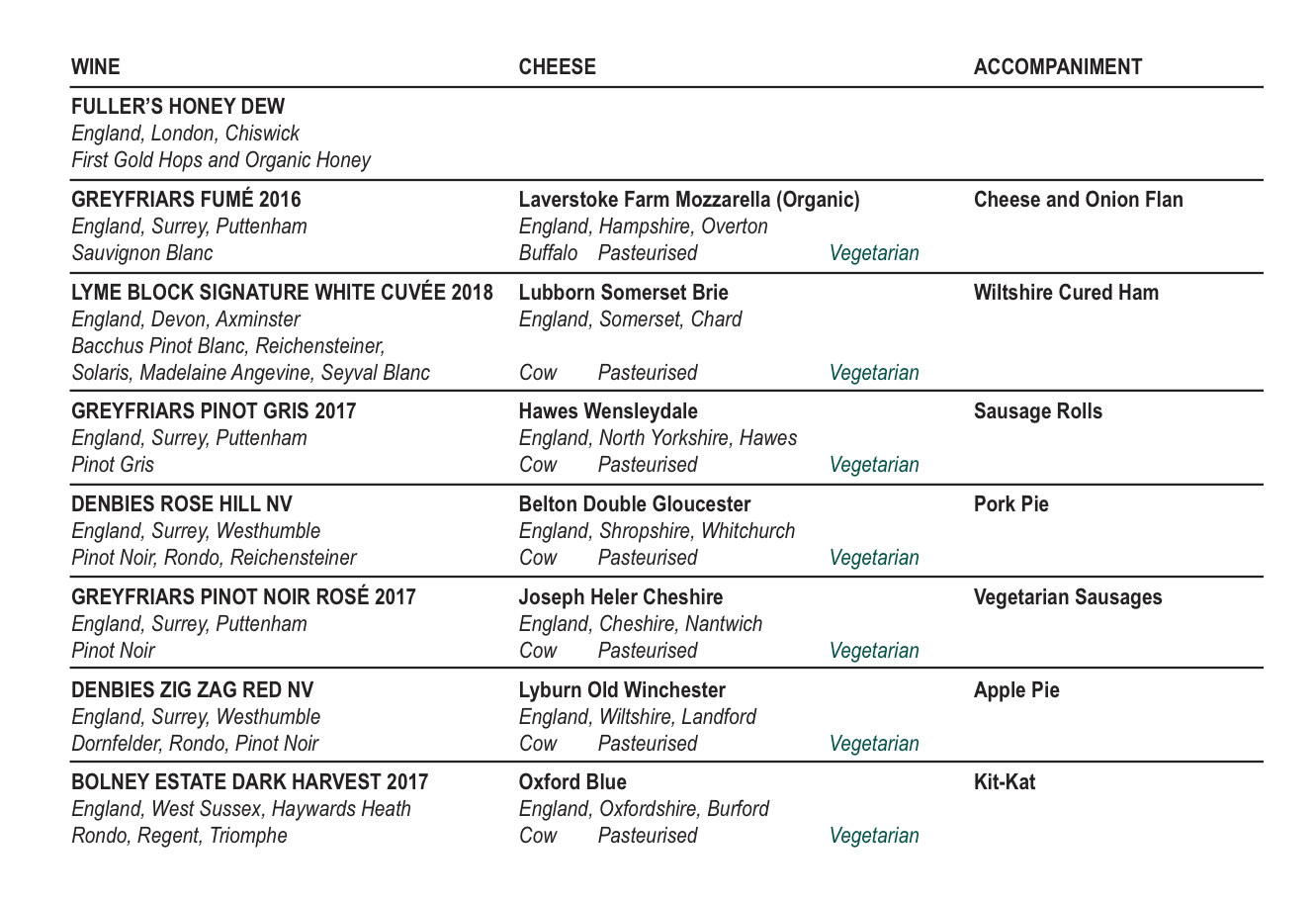 Greyfriars Fumé
100% Sauvignon Blanc – believed to be the only pure Sauvignon Blanc made in England. Only 700 bottles were made in 2016 so at our tasting we consumed nearly 1% of the production!

Greyfriars Pinot Gris
Only 2400 bottles made in 2017 – aged in oak barrels and put through secondary malolactic fermentation to give softness and texture.

Old Winchester – a cheese with a celebrity endorsement
Made by Mike Smales at Lyburn Farm in Wiltshire, this cheese is usually ages to three months when it is called Lyburn Gold.

Sometime after first making it, Mike decided to set up a stall at Winchester market and wanted something different to sell, so he ages some Lyburn to nine months and named it Winchester. The Winchester was well received and quickly sold out. Following the success at Winchester, Mike decided to set up a stall at Richmond-upon-Thames food market and one of his early customers was Magnus Magnussen. MM said he loved the cheese but would love to taste it after a further year’s aging. Mike is of the generation where he believes that MM knows everything there is to know. So he took his advice and matured the Winchester for a further year selling it as Old Winchester. I recommend you seek out Old Winchester, which is now sold between 18-22 months old and much loved either as a table cheese or as a vegetarian alternative to hard Italian cheeses in cooking, somewhere between mature Cheddar and Parmesan.

Oxford Blue – English Cheese with a French Creator
Baron Robert Pouget, living in Oxfordshire, wanted to create a soft creamy blue reminiscent of the cheeses of his native France and developed in Oxford Blue. Despairing of his countrymen general de Gaulle once commented “How can you govern a country which has 246 varieties of cheese?” Today France produces around 475 varieties of cheese; whereby the English produce around 1,750 varieties. Why anyone wants to stand for parliament is beyond me!

Bolney Estate Dark Harvest
The name creates a magical image which is entirely supported by the wine. As black grapes used to make red wine ripen in strong sunshine, I had not expected England to produce a great red. Twinned with strong blue cheese and chocolate this was a magical experience.

If you plan to attend one of Steve Parker’s tastings go there very hungry. I’d been warned and paced myself but could not have eaten of drunk another mouthful by the end of the evening. £30 per person is amazing value for a highly entertaining evening. Seven generous servings of wine to 45 people qualified why Steve needed a school bell – we definitely needed to be kept in order!

CHEESE AND WINE TASTING
Tutored Tasting of Wines, Cheeses and Meats of England