A Christmas Celebration – in aid of Royal British Legion

Supporters of the Royal British Legion were out in force for the annual Christmas Celebration at Guildhall, London. Now in its 25th year, this event has gone from strength to strength, attracting regular guests from Scotland and this year even as far away as California!

The drinks reception was held in the Old Library. Wine and soft drinks were offered by waiting staff, while plates of mince pies were on tables for guests to help themselves. They were still warm, and served with brandy butter, so this created a rather crumbly but yummy handful. The room was beautiful and set the scene for the Celebration that was to come. The original medieval library was ‘borrowed’ by the Lord Protector in the mid-sixteenth century to furnish his new palace in The Strand. Forgetting to return it, (ahem!) the current Grade II-listed Old Library was built in 1872. 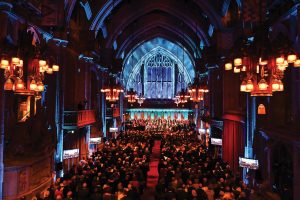 We were invited to go through to the Great Hall for the Celebration. With no allocated seating, we were delighted to secure excellent seats near the front of this stunning venue. The Great Hall has been used as the setting for the Lord Mayor’s Banquet since 1502; the Great Hall still sees regular City governance – the Court of Common Council (the governing body of the City Corporation) meets every month and the Liverymen elect the new Lord Mayor each year.

The evening was hosted excellently by TV presenter Ben Shephard. The Royal British Legion, and this annual event, are very important to Ben. We only learnt at the end of the evening that it was, in fact, his Birthday but he was only too delighted to give up his evening and celebrations in order to participate in this event. We all enjoyed joining The Bach Choir in singing ‘Happy Birthday’ to him!

The evening featured audience participation Christmas Carols (Once in Royal David’s City, It Came Upon the Midnight Clear, O Little Town of Bethlehem, O Come, all ye Faithful, The First Nowell and Hark! The Herald-Angels Sing), led by The Bach Choir, who interspersed these Carols with beautiful arrangements of choir-only ones. Accompanied by Organist Philip Scriven and The Central Band of The Royal British Legion, it made for a very festive event. Celebrity readings were delivered by Phil Davis, Lesley Joseph and Sophie Thompson.

The lighting effects projected onto the back wall were very pretty and a lovely touch but the only disappointment was that the lighting was set so low and the text in the programme so faint that it was not possible to see the words to join in during the audience-participation carols. This was very atmospheric, but not very practical if you want your audience to sing! Even if you sing these carols regularly, it is not possible to remember every word of every line.

However, it was a delightful evening! The Royal British Legion deserves to raise an enormous amount of money to support the work of the charity, concerning the care and welfare of the Service community, both past and present, and will continue to do so in the future. Lest we forget.