27th September 2018 by Editor in Artscene 0 Comments
0
Is Lunch the New Dinner?
THE LENSBURY SUMMER BALL 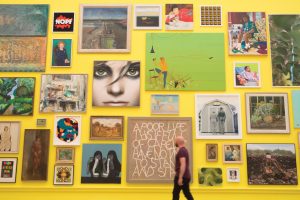 This commemoration of the 250 years since the Royal Academy was founded is most impressive. A refurbishment of much of the building, a proper use of the amazing John Madejski Fine Rooms, a specially created space to house its treasures and a new approach to the annual Summer Exhibition makes it extremely memorable.

One benefit of the revamp is the ability to walk from the Burlington House entrance through to the building in Burlington Gardens which was previously less easily accessible. The passage is decorated with classical sculptures and artefacts of historical interest to the Academy and there are also spaces for displays by contemporary artists. There is a permanent exhibition in the new Collection Gallery which contains Michelangelo’s Taddei Tondo, self-portraits by leading academicians including Sir Joshua Reynolds, a copy of Leonardo da Vinci’s The Last Supper and landscapes from Constable and Turner. The huge painting at its entrance, Sir Thomas Lawrence’s Satan Summoning his Legions, is a wonderfully dramatic introduction to it. There is an exhibition by the visual artist Tacita Dean in the Gabrielle Jungels-Winkler Galleries.

The John Madejski Fine Rooms house the exhibition The Great Spectacle: 250 Years of the Summer Exhibition, displaying works by major artists from different periods which are hung chronologically. It includes A Private View of the Royal Academy 1881 by William Powell Frith which showed how this annual show was so central to artistic life in London, especially in the 18th and 19th centuries. Pietro Annigoni’s superb portrait, Queen Elizabeth II, which was such a draw in 1955, is amongst the exhibits which are divided into different sections.

The noted artist Grayson Perry is the co-ordinator of the Summer Exhibition this year and this quirkily chosen selection of over 1,000 paintings, drawings and sculptures is very much a British institution. Two impressive huge new works by David Hockney and even a contribution by Banksy are featured. Much of the press has been favourable and there has been considerable interest in the choice and the emphasis on bright colours both in some of the works and gallery spaces. The problem is that one cannot help deploring the standard of so much of the work selected as it is so obviously mediocre or worse. To see so many fascinating paintings from past years simply emphasizes this.

However the Academy has certainly succeeded in publicizing their anniversary. Exhibits from the Summer Exhibition which includes the impressive Human Cargo (Triptych) by Paula Rego are also on display in the Sackler Gallery where the overall standard is higher. They are in the courtyard too and there are even colourful flags in the nearby streets linked to the show. As this institution looks to the future it has reminded us of its past eminence with a fantastic celebration.

Frida Kahlo: Making Her Self Up

There has been special interest in this exhibition as it is a tribute to a rare form of courage. Frida Kahlo was an artist who suffered excruciating pain for much of her life, yet her spirit was unquenchable. Her personality showed itself in the use of bright colours, both in her paintings and in the costumes and jewellery which became an integral part of her image.

She and her husband, Diego Rivera were a highly talented pair of activist artists and this exhibition gives a rare insight into her remarkable and tragic life. In 2004 a cache of photographs, documents and artefacts, which had been sealed in the half century since her death, were opened and many of these are exhibited here.

Frida was involved in a horrendous bus crash when she was 18 from which she never fully recovered. We see the orthopaedic corsets which were used as supports to her back boldly illustrated with emblems of communism and even the prosthetic leg she was eventually forced to use was decorated in red. Her fight against ill-health showed the most extraordinary courage and resourcefulness.

She wore fabulously colourful outfits and some are spectacularly displayed here. She was proud of her “Mestizo” mixed race heritage, since for her it embodied ideals of the Mexican Revolution. The exhibition uses a substantial amount of archive film. We see the home she shared with Diego, the Casa Azul, which was decorated in stunning colours and also footage of the pair, both committed Communists, with Trotsky, when he was in exile.

Her striking self-portraits showcase her distinctive style and her influence on portraiture was substantial. In some of her works she assumes a martyr-like pose. Her Self-portrait with monkey is fascinatingly stylised and the most intriguing of the examples displayed here.

This exhibition enhances our knowledge and understanding of the life and struggles of a unique artist. The portraits give it an aesthetic appeal and the artefacts linked to her fight against ill-health are extremely moving. Frida Kahlo was a true feminist icon with an enduring appeal.