After days of what seemed to be unending hot and sultry weather, I find myself in a secret garden on a cool and beautiful summer evening. Actually, I’m in College Garden overlooked by the venerable buildings of Westminster School and although we are in the heart of Westminster near one of the busiest roads in the Capital, it is beautifully quiet.

I am at a Garden Party in aid of Passage which is a wonderful charity which seeks to help the homeless.

They run the largest resource centre for homeless people in the UK …. giving access to food, showers and clothing as well as housing advice, health care, training and employment services. They also operate street outreach services, homelessness prevention schemes and accommodation projects. The Passage’s modern Slavery work (which address’s the links between homelessness and modern slavery) operates nationally in helping organisations deal with the issue, as well as contributing at an international level to address this problem.

The Passage and The Goring Hotel, in collaboration with other hotels, founded a Hotel School to encourage homeless people into hospitality industry. The School offers a short introductory course that covers all aspects of the hospitality industry, from front of house to catering. Its success has led to it becoming a charity in its own right. 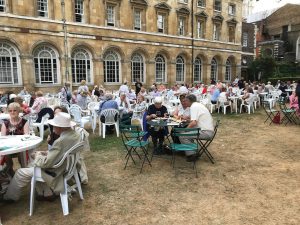 Back to the Garden Party: When all the attendees had a drink in their hand, there were speeches by Lindsey Hall, the Lord Mayor of Westminster, Mike Clarke, Chief Executive of The Passage, and The reverend Professor Vernon White, Sub Dean and Canon of Westminster.

The catering, which was plentiful and very good indeed, was provided by the Passage’s own caterers overseen by Head Chef Claudette Dawkins who has been with the organisation for 19 years. Members of the Hotel School served the drinks and there was a first class Salvation Army Orchestra that played both old time and modern day classics.

Then as everyone was finishing their supper an announcement was made by Antonio Oriando, Chair of the Night Under the Stars Committee, about another fund raiser in November 2018 at the Festival Hall (www.southbankcentre.co.uk/whats-on/118993-night-under-stars-northern-lights-2018).

All in all it was a delightful, quintessentially English occasion which raised just under £25,000 and, just as the results of the raffle and silent auction were about to be announced, there was a thunderstorm complete with torrential rain, thunder and lightning. Some hardy souls remained outside under their umbrellas but the bulk of the quests scurried for shelter in the catering marquee.

A wonderfully, dramatic end to a perfect evening.