I first went to Kiev, the elegant 19th Century capital of Ukraine, 15 years ago. I was utterly floored. It was still very hinged in the communist era. Everything was written in Cyrillic, not Russian, and virtually no signs were in the Latin alphabet. Working out the metro stops (like Khreshchatyk, Nezalzehnosti, Livoberezhna) in Cyrillic, even with specs on, was a real real challenge. 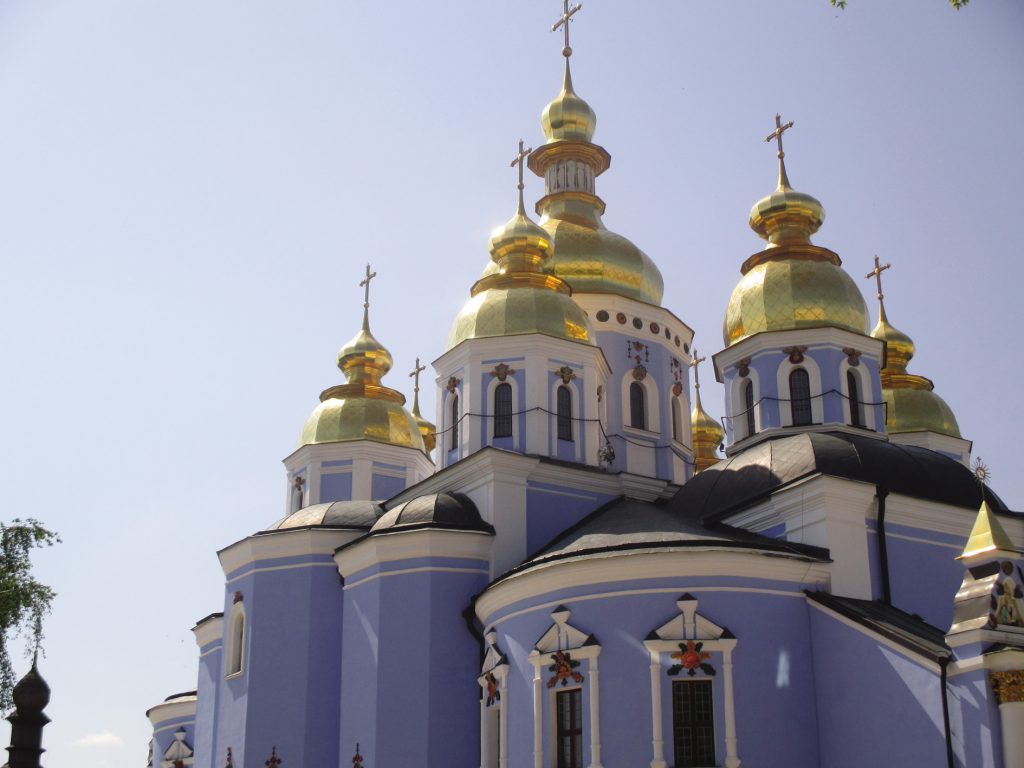 This time, however, much had changed. For starters, the annual Eurovision Song Festival had been there (9th to 13th May) and there were signs a non-Ukrainian could read. Many people spoke English, the restaurants had marvellous menus and it was alive with pavement cafes serving inexpensive local beers, vodkas and drinks one’s never even heard of. There’s a lot more going on in Kiev than chicken! Kiev is one of the prettiest and most pleasant of capitals. As you cross the Dnipro River to get to the city, you see glittering gold-domed churches on green, wooded slopes and streets of houses built on hills along the river.

The city seems to be quite split. The trading centre has a massive tree-lined boulevard with piped Caruso-type opera music coming out of the branches to assist you on your promenade on Khreshchatyk. 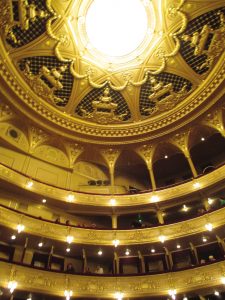 The commercial part of Kiev is up the hill and to get to the old merchant quartet (Podil) you take the cable car down by the port (which leads to the Black Sea). Or you can take the winding, paved Andriyivsky through a street market where you can buy Soviet kitsch and old postcards of Kyiv Dynamo football team and Trotskie at a rally. Dollar bills, as usual, work best.

In Vozdvyzhenka, with its dozens of brightly coloured houses positioned elegantly in a ravine in the historical heart of Kiev, people were strolling around the beautiful streets, just looking. Kiev is full of great architecture (don’t miss the 11th Century St Sophia Cathedral) and gracious squares, as well as quirky museums and market places, especially the bustling Bessarabsky Market.

Absolutely worth seeing is the Perchersk monastery complex with monks in catacombs and great golden domed churches with staggering beautiful 4th Century BC Scythian gold work. We also had a sobering visit to the museum of nearby Chernobyl with its walls of photos of deserted buildings and people, some now dead, others with growths caused by the (1986) nuclear fallout. The picture that caught me most was the one of the father and his two sons fishing on a bridge over a contaminated river wearing bathing suits and gas masks over their faces. 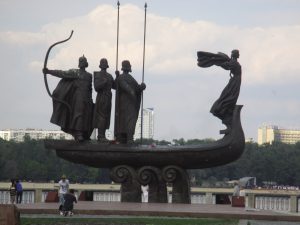 Ridiculous as it sounds I think the metro was our top hit. It is fast and fun; a brilliant 1930’s underground system with piped music (Elvis Presley) coming up through the brass ventilation grills. We also found original deco lamps, sparkling chrome, domed halls with mosaics and murals and not one piece of litter or graffiti. (Cost of a “jeton” is 7p.) There are whole trading centres in the metro halls with merchandise from flowers to rows of brightly coloured bras – which nobody tries on – sausages, caviar and cameras.

Kiev is a very interesting place, quite big – with its population of 2.9 million – urbane and friendly people but easily manageable. It’s steeped in history and heading fast for mainstream tourism. Admittedly it’s no longer a well-kept secret but you’d never know that. It’s full of surprises and not quite like anywhere I’ve been before.

(Kiev is actually Kyiv pronounced not as in “Chicken Kiev” by more like “kif”, the stuff they smoke in North Africa.)