Ljubljana, the capital of Slovenia, is difficult to spell and a bit of a head-scratcher to locate.  It is somewhere in former Yugoslavia, squeezed in between four countries: Croatia, Hungary, Austria and Italy.

It lies halfway between Vienna and Venice, at the crossroads of two different cultures, and is unexpectedly fascinating.  The old and the new jostling along harmoniously, the locals are absolutely charming. Known for its relaxed atmosphere, it’s small and being so small it is easy to get to grips with. 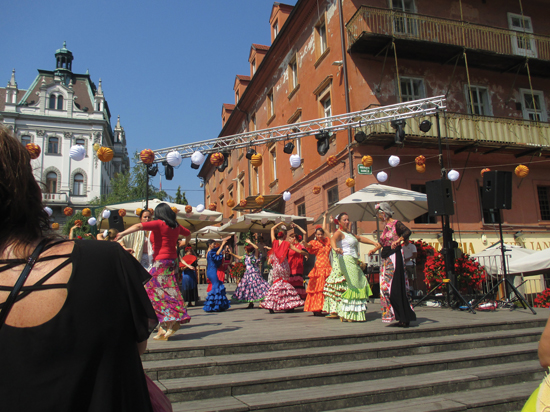 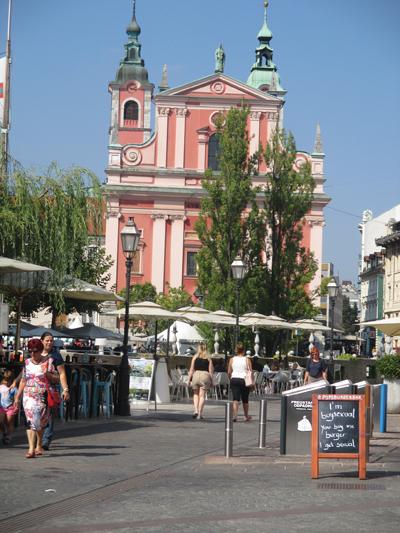 As you stroll through streets full of outstanding architecture with a real mix of styles, you might be tempted to stop all the time for some street food, a cold Union beer an ice cream, and just mull away the time people watching and relaxing. It’s that sort of place. No rush.

Downtown is overlooked by the castle and encircled by the Ljubljanica River. The centre fans out from three bridges, the Triple Bridge – which has stood in its place since 1842 when it replaced an old, strategically important medieval wooden bridge connecting the north-western European lands with south-eastern Europe and the Balkans. In the 1930s, the two side bridges, intended for pedestrians, were added to the original. These were designed by the architect Jože Plečnik, the man behind much of the city’s charm. His statue stands in the main square, Prešernov trg, next to the giant music box that will play any tune of your choice from a list of 100, and overlooking a cobbled circle where everybody cools down under an over-head spray of water.

On the right bank of the river is the Central Market colonnade filled with stalls of everything from bangles to falafels to the freshest of fruit and vegetables . Slovenia is a rural country. They say it has more tractors per head than anywhere.

Keep walking and you get to the Dragon Bridge where the River Spirits, who might lure young ladies into the waters, hang out. A little further on, in Krekov Square, is the funicular to the Castle that’s been there since before the earthquake of 1511. You can walk up the mountain but for 7euro I’d rather take the funicular to see the views.

There are endless things to do in Ljubljana. An 8 euro cruise along the river is a slow meander through the old town. Perhaps go for a wander across the Tivoli Park on Rožnik Hill. The city is full of museums and lovely, mainly Baroque, churches like the towering, pink Franciscan Church in the centre. The philharmonic orchestra goes back to 1701 and music is always playing somewhere.

This year’s European Green Capital, it has been inhabited since 2000BC by the Veneti, Illyrians, Celtic tribes, Romans, Francs, Hungarians, Czechs and Hapsburg. 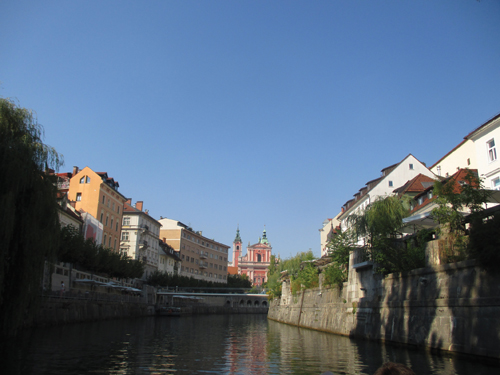 In the 20th Century, Slovenia entered a union with Serbia and Croatia, later known as Yugoslavia. World War One passed the city by but in World War Two the city came under fascist occupation and was encircled by 30km of barbed wire fence. After this chequered political history, independence was declared in 1991. Slovenia was the first country from the former Yugoslavia to become a member of the EU.  (Croatia followed.)

Clean, green and appealingly serene, go before the others discover it!

Getting there: easyJet and Wizz Air fly there direct.