Peckhamplex, in London SE15, is London’s only independent multiplex. It’s also London’s most inexpensive cinema (all tickets all day £4.99) and this year it won Time Out’s ‘Most Loved London Cinema’. Built on the site of a former Sainsbury’s 23 years ago, Simone Brown has been the manager since the cinema opened and remembers the week before it opened.

“There were no seats in the auditoriums, no carpet, just a few tiles on the foyer floor and not a sales till or popcorn warmer in sight. I stood with the rest of the management team wondering what we had let ourselves in for.

The last of 1500 seats went in three hours before the doors opened. The cinema opened in a blaze of publicity. The gala opening night was attended by the Mayor of Southwark, local councillors, community workers, local business people and a few celebrity guests. The ribbon was cut by singer CJ Lewis, who was then topping the charts with Sweets for My Sweet, and after a champagne reception everyone enjoyed a screening of Keanu Reeves’ new film Speed.

The next morning we opened to the public … Peckham’s brand new – and only – cinema. 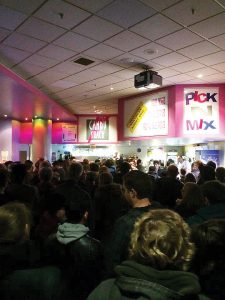 However, all the publicity may have been in vain as one of our first customers came in with her trolley asking where the bread counter had moved to!”

Peckhamplex, with its six screens, screens the latest hot films as well as some classics and foreign films. It runs regular competitions and film events, with starts from Olivia Colman and Danny Dyer to Ken Loach and Chimamanda Adichie Ngozi coming to present their films. It has regular screenings for people who are hard of hearing or the autistic and its Parent and Baby Club is a social legend.

If you’d like to receive Peckhamplex’s weekly newsletter, see: