Borough Market has, over the last ten years, developed from a forgotten area of London to one of the busiest thriving places to be. The market is alive with amazing foods for sale and there are restaurants featuring food from around the world. Completion of The Shard close by has also added verve to the area although Vinopolis wine world did not survive. 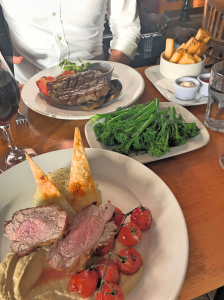 Since 2004 The Menier Chocolate Factory has been an adventurous theatre incubator launching new works and reviving well loved theatre with productions that have won every UK Theatre Award you can list and frequently transferred to the West End with huge success. In 2015 it was clear from early in the show that Sheridan Smith in Funny Girl would be another of The Menier’s successes. This year I went in trepidation to see, and then was blown away by The Secret Diary of Adrian Mole aged 13 ¾ – The Musical so won’t be surprised if this musical makes the transfer.

Just around the corner from Borough Market, The Menier Chocolate Factory also houses a restaurant and art gallery; oh yes, the building was originally a chocolate factory. The restaurant is also available as an event space so they seem to have all their options covered. My friends and I often book pre-theatre supper in the restaurant enjoying some fun convivial times. Pre-theatre the restaurant is packed and the team do an amazing job of cheerfully serving the whole restaurant in lightening time for the show.

On a less busy Friday lunchtime my friend, Richard, and I enjoyed a delightful relaxed lunch. Richard stayed with safe options: Scottish smoked salmon with citrus cream cheese and potato bread crisps which he declared delicious and loving the citrus cream cheese which intrigued him. His 8oz Argentinian sirloin steak with green peppercorn sauce, grilled tomatoes and Portobello mushrooms was cooked exactly as he’d requested. Rare when he cut into it but charred and sealed on the outside. Menier chunky chips and Tender-stem broccoli are just what you need to accompany hearty meat mains.

I could have made a main course of confit duck bruschetta with white bean and blueberry compote. The blueberry lifted the richness of the confit perfectly. Definitely a dish I shall try again if it is still on the menu when I visit in future. 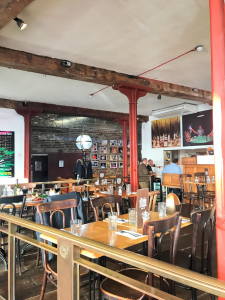 Having lived in Dubai for five years in 1990’s, the Middle East inspired Herb-rubbed lamb rump with baba ganoush, roast baby tomatoes, tabouli and tortilla shreads had captured my imagination. Tabouli is a dish open to interpretation. The tabouli they sell at Green Valley Lebanese delicatessen on Edgware Road is packed full of bright chopped parsley and exactly as I remember it from Dubai. The tabouli with my lamb rump was mainly bulgur wheat and didn’t quite hit the spot for me. It was perfectly healthy and tasted good but not very exciting which was a shame as the baba ganoush was smokey and tasty. Lamb rump can also be a risk however this was tender and had an almost sweet flavor.

Lamb rump and Argentinian steak could only mean one type of wine. Ampakama Malbec 2016 (said 2014 on the menu) from San Juan Argentina. Malbec is so popular I suspect the suppliers struggle to find the right quality. This was OK, spicy and fruity, a good accompaniment to the meat but very young and weak. Not quite the powerful hit you want from a Malbec.

The menu is fairly simple at The Menier Chocolate Factory and there are no adventurous choices. The food quality is excellent and cooked to the highest standards. £107 for two of us, two courses and wine, is OK by Central London prices. So the next time Borough Market is crowded with visitors and restaurant tables hard to come by, The Menier Chocolate Factory is a great secret option.