29th January 2019 by Editor in Features 0 Comments
0
CONSTANT EATER By Jonathan Byrne
Events @ No. 6 – Dedicated to Excellence and Innovation in Hospitality. 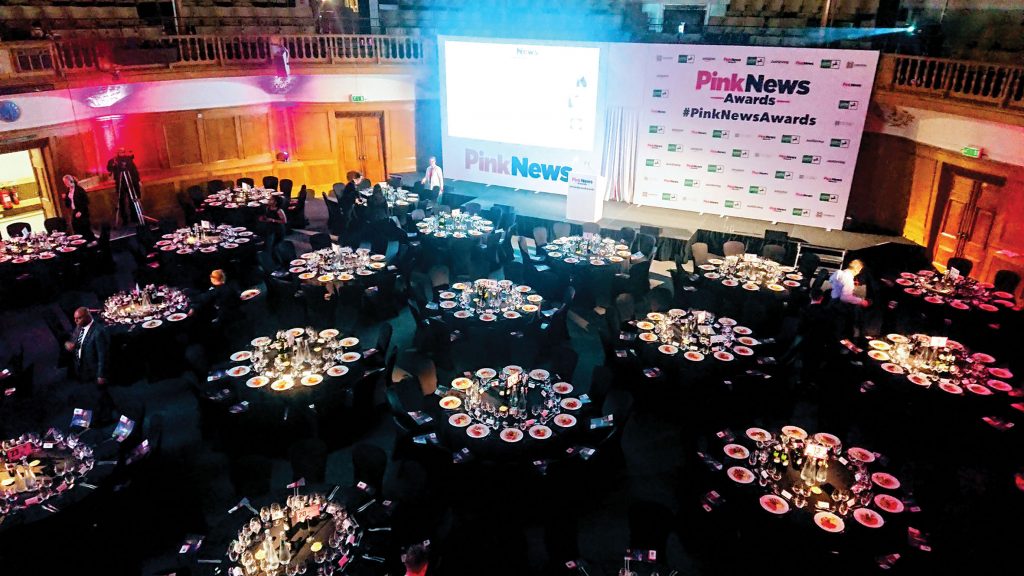 The LGBT+ website hosted its sixth annual awards ceremony at Church House Westminster on the 17th of October 2018. The award ceremony, which recognises achievements and support for LGBT+ right across a wide range of sectors and activities, saw awards handed out to the best campaigner, third sector organisation and politician of the year, as well as a Lifetime Achievement award.

Inside the Westminster venue, the entrance to the Bishop Partridge Hall was used as a press hub whilst the reception was hosted in the Hoare Memorial Hall. After a vocal performance by the Pink singers, a London based LGBT+ community choir, the 270 guests made their way to the Assembly Hall for the awards dinner.

The National Trust won the Third Sector Equality award for leading the efforts in highlighting LGBT+ heritage across the country and further afield. The award was presented by Ben Farmer, head of HR (UK) at Amazon and Baroness Williams of Trafford, Parliamentary Under Secretary of State (Minister for Equalities) and a Conservative life peer.

Kellogg’s won the Advertising Campaign of the Year award for the My Perfect Bowl campaign, made by Leo Burnett London. The award was presented by Lord Ian Duncan and Freddie Bentley along with Sian Owen from Channel 4’s The Circle. Stonewall won the PinkNews Lifetime Achievement Award. The LGBT+ charity was given the honour by former Prime Minister Tony Blair, who praised the oranisation’s “unrelenting pressure and campaign against Section 28 and on lifting the ban on LGBT+ soldiers.”

Robin Parker, General Manager of Church House, commented, “We were delighted to host this awards dinner. It was exciting to see such a mix of politicians and celebrities together, celebrating the progress of LGBT+ rights.”