30th May 2018 by Editor in Letter from Abroad 0 Comments
0
The Launch of “Pearls Before Poppies” at Christie’s
St Mary’s Church, Putney 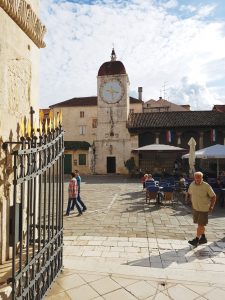 It’s no secret that Split, perched on the Adriatic coast and surrounded by mountains and islands, is a gorgeous place to visit.

It has been continuously occupied since 305AD when Emperor Diocletian moved in and made it his retirement home and it seems that history here is still alive. As you wander around the labyrinth of the Old Town, enclosed within his huge palace’s white Splitska stone walls, you can still feel that ancient pulse.

Three thousand people still live within the walls and as yet it hasn’t been totally sanitised into a tourist trap. Admittedly tourists are no novelty here but there are still a few quiet, narrow cobbled lanes with places that look like old sheds where you can stop for a coffee, a beer, rakia, the local firewater or wine. (There are three categories of Croatian wine: Vrhunsko is best and most expensive, Kvalitetno is good quality and Stolon Vino is table wine.) There are dozens of restaurants all over Split serving fish and seafood, herby lamb, freshly baked bread (Kruh) and olive oil and succulent vegetables. It’s a place to eat and drink well. 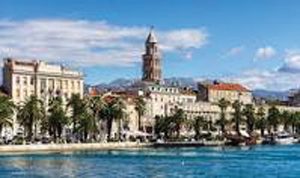 Split is half way along the Croatian Coast, between Rijeka (European capital of culture in 2020) and walled Dubronvik. Split and Croatia generally have a furiously chequered history, squashed in between Slovenia, Bosnia & Herzegovina and Montenegro. It was once a Greek colony and at various times became Byzantine, Ottoman, Hapsburg, French and Yugoslavian. In 1991, after the Croatian war of independence, it seceded from Yugoslavia with Zagreb as its capital.

All these historical movements still are evident in Split, with its honey-yellow stone houses and red tiled roofs, temples, columns, fortresses, squares, museums, the amazing Cathedral of St Lawrence and the elegant Republic Square with its cafés and colonnades. Watch the day pass from the gracious Riva where boats bob on the clear-as-gin sea. It could be a Visconti film, as people stroll along the marbled Riviera. The evening, as the sun goes down, is even sweeter to behold. 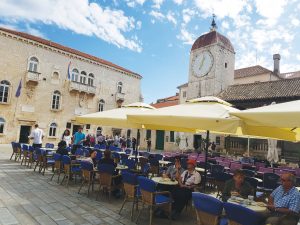 ourism is booming in Split. It has a lovely climate and is relatively inexpensive compared with Western Europe. A long weekend in Split is about as near to perfection as possible. 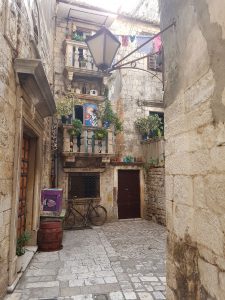 It would be a shame not to visit some of the islands scattered around Split. They have crazy names, such as Hvar, Vis, Skrip, Scolta, and Korcula, and there are ferries to the entire archipelago from Split harbour. With their rugged landscapes, historic sleepy towns, beaches, transparent sea and surprisingly good food and wine, they are not yet Ibiza or Mykonos but undoubtably will be in the not so distant future. Their beauty and fascination can’t remain undimmed forever.

Foot note: There are several easy day trips up and down the coast to the beaches on the Majan peninsula, and inland. One not to miss is to Trogir, a tiny island which is a World Hertiage site. With its walled Old Town infused by a mix of Romanesque, Gothic, Renaissance and Baroque buildings, it is not to be missed. Take a bus or taxi.

Go to Split out of season, October or May, and you might even have it to yourself.