STOP THE TRAFFIC, a pioneer in human trafficking prevention 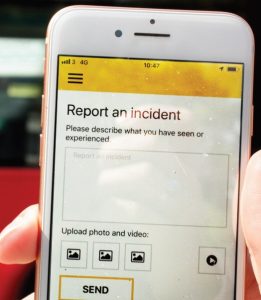 Through radical information sharing and collaboration, STOP THE TRAFFIK aim to build a global picture of human trafficking hotspots and trends, to empower individuals, organisations and agencies to make more informed and better choices, to signpost them to safe places to get help and support and to encourage appropriate response and reporting.

By shining a light on this hidden crime in the hospitality sector, we can all change the environment and increase the risk to the trafficker and the safety of the vulnerable. We wanted to know more and asked Stop The Traffik to explain.

How bad is this currently in the UK hospitality sector?
Hospitality is one of the priority high-risk sectors for modern slavery in the UK. Certain jobs roles are more at risk than others, for example, hotel cleaners, night porters, and security guards. The risk is higher because they can be classed as ‘low skilled’ jobs, which are often accessible to migrant workers who might not have the language skills for front of house roles. Where there is a language barrier, workers have weaker negotiating power or might not be able to ask for help. Additionally, sub-contracting within hotel companies is common, which can weaken employment accountability and makes the use of contracted labour more likely. The use of piece-work pay is also common which, when combined with unrealistic targets, can lead to pay below the National Minimum Wage.

The hospitality sector’s supply chain risks are diverse and are spread across multiple tiers of the supply chain. Service sector tier-1 suppliers create immediate risks for hospitality companies, including industrial laundries, garden and maintenance contractors, and construction companies. Further removed, tier-2 suppliers that pose a risk for hospitality companies can include food, uniform, bedding, and furniture manufactures. Whereas, completely removed from the companies, but still an important element of their supply chains, are tier-3 suppliers that pick the food, cut the timber, and collect the cotton needed for their essential goods.

There’s no silver bullet for mitigating these risks. Instead, hospitality companies need to prioritise specific sectors and engage with their suppliers to develop relevant solutions to tackle the causes of modern slavery in those contexts.

What are the signs to look out for?
There are many red flags that should raise suspicion of exploitation and potential human trafficking within a hotel or venue. Only observing one indicator is not necessarily a cause for concern, but when several are witnessed at the same time, a concern should be raised.

• Overworked, tired, isolated or fearful employees
• Employees unable to speak English, or an employee speaking on behalf of others
• Employees with signs of physical or psychological abuse
• Employees being forced to live on site
• Employees discussing their need to work to pay off a debt, not being in control of their passport or visa, or having deductions taken from their wages
• Employees not wanting to discuss their personal life or not knowing where they live

Do you have a list of things you would recommend event organisers should check when selecting a venue or caterer?
It’s not the sole responsibility of an event organiser to audit a venue or caterer based on their ethics. However, organisers should trust their instincts; everyone has a part to play in the fight against modern slavery. If companies appear to be cutting corners, are offering too-good-to-be-true prices, or don’t appear legitimate, exploitation is much more likely.

One way to determine a company’s risk is to ask them if they use recruitment agencies or labour providers for temporary contract workers. If the answer is yes, then the company might not even be aware of the risks they’re facing, and if not effectively managed, can lead to exploitation taking place even in ‘legitimate’ work places.

Many caterers and venues don’t publish a modern-day slavery statement or policy. What can event organisers do to encourage more to do so?
You can include an effective modern slavery statement into your contract requirements for venues and caterers. This will quickly communicate to these companies the importance of complying with the Modern Slavery Act.

Is there an online resource event organisers can direct suppliers to who want to create policies and statements?
As well as the UK Government’s official advice on how to write a modern slavery statement, one of the best unofficial guidance documents is produced by CORE.

If someone suspects someone is being exploited, what should they do?
If someone is in immediate danger, you should always call 999. However, given that modern slavery is such a hidden crime, often individuals will only have suspicions that may not warrant a 999 call.

In these less certain cases, you should look to report cases of labour exploitation to the Gangmasters and Labour Abuse Authority, whilst cases of sexual exploitation should be reported to the non-emergency 101 line. You can also report a suspicion through the STOP APP, which will then be assessed by Stop The Traffik’s intelligence team and forwarded on to the appropriate enforcement agency or partner organisation.