The Launch of “Pearls Before Poppies” at Christie’s

The Launch of “Pearls Before Poppies” at Christie’s 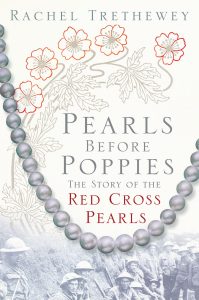 In a cabinet on display at Christie’s for this event there was a book of auction catalogues from 1918. One of these was the Red Cross Pearl Appeal when women from every class in society donated pearls to raise funds for those who had suffered in the First World War. This was launched by Lady Northcliffe, the wife of the newspaper proprietor and nearly 4,000 pearls were contributed. Originally individual donations were publicized, though they later became anonymous, which was a sign of the way the class structure in Britain was beginning to break down.

This event was the launch of Rachel Trethewey’s book Pearls Before Poppies: The Story of the Red Cross Pearls about the original auction held at Christies in 1918 which raised £100,000, the equivalent of roughly £5 million today. It is published by the History Press whose Managing Director Gareth Swain spoke briefly. The author then gave a fascinating speech telling us about some of those who donated originally. In a charming touch, some of their descendants were among the guests. Around the walls were a selection of paintings from Christie’s Modern British & Irish Art which are soon to be auctioned.

The History Press has joined with the International Fundraising Committee of the British Red Cross to launch their Pearls for Life campaign which will commemorate the original auction by urging donors to contribute pearls and jewellery. This will raise funds for the wonderful work the British Red Cross does. The fundraising event will be Pearls for LIFE, a dinner and auction held at the Savoy in July of this year. The Vice-President of the Committee, Maria Shammas, told us about the organization’s tireless help for those in need both at home and abroad. A short film showed some of the assistance it gave during the terrorist attacks and the Grenfell Tower fire in Britain last year.

This year marks both the centenary of the auction and of the end of this most terrible of wars. It is an inspired idea to raise funds for important causes in our troubled world today whilst we pay homage to those who made such sacrifices a century ago.